Work on the server via ssh

It also possible to connect to the server via ssh protocol using command line (bash), eventually it is possible to insert the command as a parameter (it is then executed and the connection is terminated).

Available commands are provided in the /usr/bin directory. It is also possible to use standard bash shell tools, such as pipe command. If you need to install something else please contact customer support support(at)cesnet.cz. The shell is generally designed only for manipulation with data but not for calculations etc.

Example of command for connect to the server:

Example of command for connect to the server with forcing SSH version 2 protocol:

Default umask is 022 while using SSH.

Executing the commands via Putty tool

Executing the command is in Putty defined in the “Connection→SSH” category, where we can insert required command into the line “Remote command”. After the command execution is the connection automatically terminated, which will cause (default settings), that the window is closed and the displayed output is lost. It is necessary to select in the Session category “Close window on exit” to “Never, to make possible to read the output.

Putty usage is beneficial especially for simple command running. Putty does not have command history and it is always necessary to insert the command again. If you log in often to the server via ssh, it is better to use in Windows system CygWin application - rsync client installation for command line in the Windows/Cygwin. 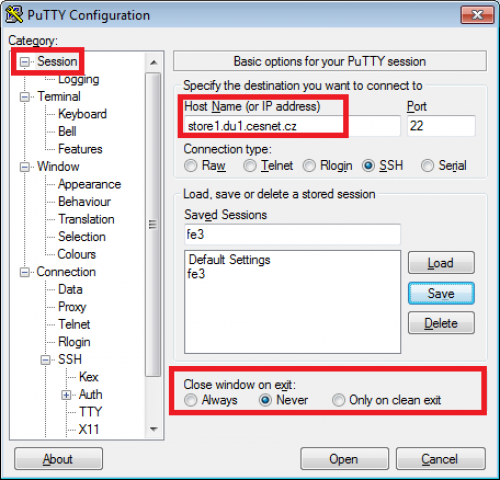 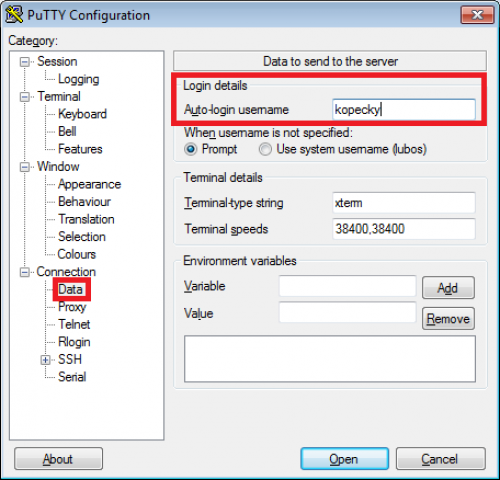 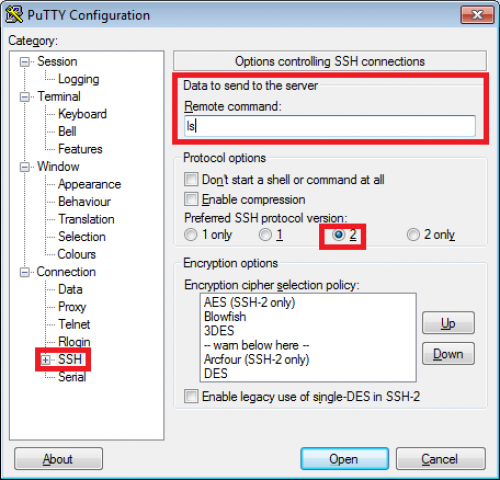 Midnight Commander (MC) contain module for “File transfer over shell filesystem” (FISH), it concerns the technology, which does not use SFTP protocol, but it requires the possibility to send general commands via SSH terminal access.
At the CESNET Data Storage is from the reason of security issues allowed to insert only limited set of commands and the FISH technology is thus not available - we recommend to use SSHFS as more universal substitution, it provides an access to the files not only for MC, but also for another application as well.
Last modified:: 03.03.2020 15:34